We are dissecting how microbial and viral communities persist in the lungs of people with cystic fibrosis (CF) in order to design new treatment strategies. We use a metagenomic approach to characterize the communities, and we collaborate with a range of clinicians, bioinformaticians, chemists, engineers and mathematicians to generate samples, data and ideas. In collaboration with Dr. Douglas Conrad who runs the adult CF clinic at UCSD, we collect sputum samples from patients over time.

The lives of people with cystic fibrosis are punctuated by flare ups of the chronic infections and inflammation in their lungs, which are normally treated with antibiotics. We take sputum samples before, during and after these flare ups and examine the microbial and viral communities through metagenomic sequencing of their DNA and RNA. Once or twice a year we also obtain an explant lung when a patient undergoes a lung transplant. Knowing both the genetic potential and real-time expression of genes responsible for different types of metabolism throughout the treatment cycle is helping us understand the lifestyle and survival strategies of the organisms in these communities. This may enable development of microbial biomarkers of disease state that predict an oncoming flare up before the inflammation and damage become full blown.

A surprisingly large number of patients in this San Diego population are colonized by Rothia mucilaginosa, which is not typically included in clinical laboratory characterizations of CF lung infections. One consistent theme that is apparent in all of our results is that each CF patient harbors a unique microbial community, comprised of different proportions of bacterial taxa with specific sub-species and strains that have assembled and evolved under the conditions of a particular lung. The lack of clear signatures of disease state across patients is an important reminder that one way to improve medical control of CF lung infections is to design individual treatments that interfere with a particular mode of survival.

In collaboration with Sara Zarei and Peter Salamon in the SDSU biomath group, we are comparing MRI data from CF patients with models of the demise of lung function as increasing numbers of lung tube branches are plugged and irreversibly damaged. We are also analyzing breath gas samples from CF patients with the Rowland-Blake group at UCI to characterize the volatile molecules present in their breath, and comparing them with healthy patients and background room samples. Early results include molecules that indicate synergisms between Streptococcus spp. and phenazine producing microbes such asPseudomonas, which provide alternative electron acceptors and enable anaerobic respiration. To test the synergisms we identify through metagenome and metabolome analysis, we are establishing systems for culturing CF lung-derived organisms in conditions that mimic the CF lung. Establishing model systems for CF-associated microbial communities will also allow us to test how novel treatments such as hyperbaric oxygen affect microbial community structure and function.

The protective layer of mucus on the body’s surface serves both as an entry point for pathogens and a home for large populations of beneficial microbes. This mucus layer harbors a large diversity of both bacteria and phage. We show elevated concentrations of phage on all mucosal surfaces sampled, ranging from cnidarians to humans, compared to the surrounding environment.

Using bacteriophage T4 and various in vitro tissue culture cells as a model system, we demonstrate that this increase in phage abundance is mucus-dependent. This phage-mucus association reduces bacterial attachment and colonization of the mucus, which subsequently protects the underlying epithelium from bacterial infection. Enrichment of phage in mucus occurs via binding interactions between variable glycan residues displayed in mucus and immunoglobulin-like protein domains exposed on phage capsids.

Based on these observations we propose the Bacteriophage Adherence to Mucus (BAM) model that provides a ubiquitous, but non-host-derived, immunity applicable to mucosal surfaces. This benefits the metazoan host by limiting mucosal bacteria, and benefits the phage through more frequent interactions with bacterial hosts. BAM suggests the first demonstration of a symbiotic interaction between phage and metazoan hosts that provides a previously unrecognized immunity that actively protects mucosal surfaces.

Building off the BAM model we are working on a range of follow up projects: 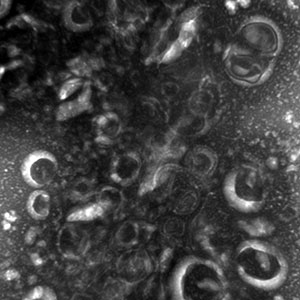 Viruses, and bacteriophage in particular, are the most diverse and numerous biological entities on the planet. Phage interactions with bacterial hosts, which can be observed through population size modulation by outright killing or possessing ecologically relevant genes conferring host growth advantage, have a profound influence on environmental nutrient cycles. Unfortunately, how phage influence community dynamics is poorly understood due to the fact that only 10 to 30% of viral genes found in the environment have sequence similarity to any other identified protein, let alone any protein of known function. The goal of this project is to characterize these phage proteins of unknown function using a combination of high throughput computational and physiological methods, in concert with protein crystallography, to gain insight into phage biodiversity, along with the environmental forces driving phage evolution, and develop a better understanding of host-phage interactions. 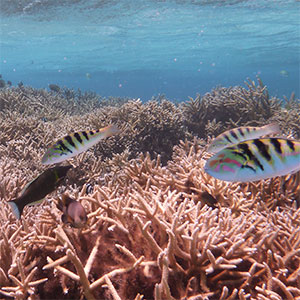 Cnidarians diverged from bilateria 550 million years ago and are considered to be the basal phyla to all metazoan life. Recent work has suggested that despite their morphological simplicity, the cnidarian immune repertoire is highly complex with many unexpected similarities to the human immune system (Putnam et al., 2007 and Shinzato et al., 2011). To investigate the cnidarian immune response we utilize molecular tools developed for the human system and apply them to reef building corals as well freshwater Hydra species. In addition to functionally characterizing the cnidarian immune system we are investigating how the resident viral population interacts with host immune components to create a predicated map of the coral immune response. Taken together this project provides novel insight into the general evolution of immunity with potential application to human biology.

The lives of people with cystic fibrosis are punctuated by flare ups of the chronic infections and inflammation in their lungs, which are normally treated with antibiotics. Antibiotics treatment and proper disease management have expanded the lifespan of CF patients, but still microbial lung infections are the primary cause of morbidity and mortality in CF patients at too young age.

In the CF clinic, we identified a set of patients that are non-responders to antimicrobial therapies and their lung function is rapidly declining. In this case we use a multi omics approach to investigate the overall composition and metabolic activity of the microbial community, with the goal of incorporating this techniques in routinely CF clinical practice to tailor specific antimicrobial therapies and increase the survival of CF patients.

We propose a personalized multi omics strategy to characterize the climax and attack communities in the respiratory airways of individual CF patients. This Cystic Fibrosis Rapid Response (CFRR) strategy incorporates metagenomes, metatranscriptomes and metabolomes from longitudinal samples, including stable and exacerbation periods, to monitor the total microbial community, its active members and their metabolic products. This information, when provided in a clinically relevant time frame, allow clinicians to make an informed decision about prescription of specific antibiotics and other therapies.

In a number of non-responder rapidly declining patients, we identified that the microbial community is dominated by a single bacterium outcompeting the other members of the community, these bacteria are well adapted the lungs environment and resistant to multiple antibiotics. The survival of the CF patients with this kind of dynamics depends on the control of this pathogens, we are developing platforms for the isolation of lytic bacteriophages for possible treatment and tailoring personalized strategies for the management of this acute exacerbation events.

Bacteriophages in the cystic fibrosis system

We are investigating the role of bacteriophages in the remodeling of the microbial communities, lateral gene transfer and lytic to lysogenic decisions in the cystic fibrosis system

The protective layer of mucus on the body’s surface serves both as an entry point for pathogens and a home for large populations of beneficial microbes. This mucus layer harbors a large diversity of both bacteria and phage. Using bacteriophage T4 and various in vitro assays, we show that phage predation of bacteria is enhanced in mucosal layers. Based on these observations we propose the Bacteriophage Adherence to Mucus (BAM) model that provides a ubiquitous, but non-host-derived, immunity applicable to mucosal surfaces. This benefits the metazoan host by limiting mucosal bacteria, and benefits the phage through more frequent interactions with bacterial hosts. BAM suggests the first demonstration of a symbiotic interaction between phage and metazoan hosts that provides a previously unrecognized immunity that actively protects mucosal surfaces.

Current work is investigating the specificity of phage-mucus interactions. To accomplish this, we are employing the model phage T4 that exhibits a mucus-adherence phenotype via Immunoglobulin-like (Ig-like) domains. Biochemical characterization of T4 Ig-like domains intends to address the adaptability of phage to diverse glycan residues displayed by mucin glycoproteins. Additionally, we are identifying hypervariable Ig-like domains in non-model phages using a bioinformatic approach. Collectively, our work aims to define the tripartite symbiosis between phage, bacteria and metazoans.

Building off the BAM model we are working on a range of additional projects: